Planning application has gone in for a major development being led by Persimmon homes:

COMPREHENSIVE DEVELOPMENT OF 'LAND TO THE NORTH OF JUNCTION 33 OF THE M4' TO CREATE A NEW COMMUNITY CONTAINING: A RANGE OF NEW HOMES, INCLUDING HOUSES, APARTMENTS AND SOME SHELTERED ACCOMMODATION FOR THE ELDERLY (USE CLASSES C2 AND C3) A PARK AND RIDE FACILITY AND TRANSPORT INTERCHANGE OR HUB COMMUNITY FACILITIES INCLUDING A NEW PRIMARY SCHOOL AND COMMUNITY CENTRE (USE CLASS D1) A LOCAL CENTRE INCLUDING SHOPS (USE CLASS A1), FINANCIAL AND PROFESSIONAL (USE CLASS A2), FOOD AND DRINK (USE CLASS A3) AND A CLINIC OR SURGERY (USE CLASS D1) NEW OFFICES, WORKSHOPS, FACTORIES AND WAREHOUSES (USE CLASSES B1, B2, B8) A NETWORK OF OPEN SPACES INCLUDING PARKLAND, FOOTPATHS, SPORTS PITCHES AND AREAS FOR INFORMAL RECREATION NEW ROADS, PARKING AREAS, ACCESSES AND PATHS OTHER ANCILLARY USES AND ACTIVITIES AND REQUIRING; SITE PREPARATION, THE INSTALLATION OR IMPROVEMENT OF SERVICES AND INFRASTRUCTURE; THE CREATION OF DRAINAGE CHANNELS; IMPROVEMENTS/WORKS TO THE HIGHWAY NETWORK AND OTHER ANCILLARY WORKS AND ACTIVITIES

It looks like this replaces the previous scheme for an international business park (the focus for office development, rightly now seems to be central Cardiff, with business park space able to be provided at Cardiff Gate or Celtic Springs). There will be more limited office and employment space at the southern part of the site bordering the junction (noone wants to live by a motorway).

The plan is for:
34 hectares of residential land for up to 1,500 dwellings
5.5 hectares of employment land
2.6 hectares for a (bus) park and ride
32 hectares of open space including retained woodlands
a 2-form entry school with fields covering 2 hectares

There is talk of a railway line as part of the metro plans but it looks to be to the east of the application site. Perhaps a station would be part of neighbouring developments to the east. But it seems strange to have a park and ride scheme for buses within about 1/2 mile of a potential rail scheme. I would almost certainly site the park and ride differently so that it could also be linked to the railway in case that scheme goes ahead.

Very comprehensive planning application - 91 documents including EIAs, a master plan, details of the proposed new junctions (one off J33 and two off Llantrisant Road).

The dismantled railway is being left undeveloped and marked as a 'green corridor' - I suspect this is ultimately where the new Metro/Rail-line will go, doglegging before it hits the M4 onto the course of the old freight line (where it will connect into the existing City Line in Waterhall). This is a plan of the route I knocked up a while ago as an experiment, it looks as though it might still work in that masterplan (click for a bigger version). 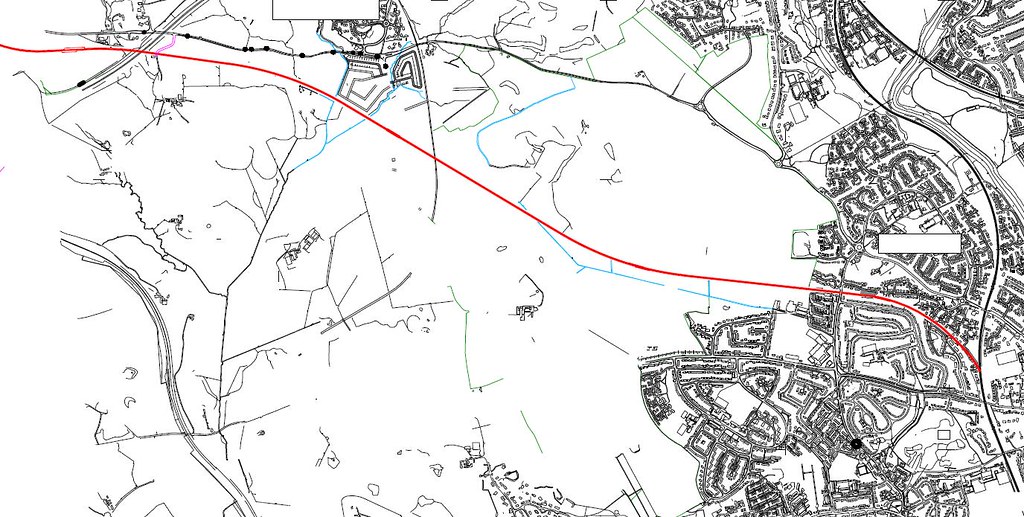 Strange that the Park and Ride will be nowhere near the railway line though - personally I'd switch it with the Services so that it ends up right alongside the railway line.

I didn't see this coming, that's another application for 1,000 plus homes for the city (although just outside the main part of it I know).

I'd just like to see one of them start now.

A really impresive application - so much better than the Pontprennaus and Thornhills of this world!

It needs the Metro though - otherwise the pressure on Llantrisant Road is going to be horrendous.

Can't believe this misses the opportunity to access the M4 at junction 33 or provide a direct route to Culverhouse Cross and beyond from Llantrisant Road. Instead of relieving pressure on Llantrisant Road this simply adds to it.

Great to see things moving, but why is access from j33 described as 'limited vehicle access'?? A major motorway junction and somehow access is to be limited?

I'm guessing the reason is that they don't want the development to become a 'rat run' for traffic from Creigau, Groes Faen, Radyr, Fairwater etc getting on to the M4. It is understandable given their plans for avenues and streets.

One option would be to have a new link road but that would split the development in two. It would compromise what, at least on paper, looks like a well thought out 'village'.

So a case of aesthetics before practicality. Why not have a spur of llantrisant road through the centre, linking to j33? This could be developed as a linear commercial centre with retail, commercial and offices, so no residential fronting the main road. The more I think about it the less I like the proposal actually. It has been planned in isolation and not taking into account the knock on effect this development would have.1500 houses will generate additional traffic on llantrisant road. By blocking access to j33 persimmon are saying we don't want outsiders driving through our development, but don't mind forcing traffic from our development onto an already overcapacity road through other existing developments.

I don't see why they couldn't have done what they've done at junction 30 with the other end of the A4232. Build a dual carriageway from junction 33 to Llantrisant road and then build the village to the west of it. That way it's there for future developments, provides access to the village and better access to Creigiau and Pentyrch. As it stands There's still pretty shit access to the M4 for those villages, which is pretty daft when there's a junction right next to them.

Pontprennau may be shit in some respects but at least it's very accessible by car and likewise, because of previous planning, so will St Edeyrn

The "Echo" has missed this point completely, its report stating there will be access at Junction 33. I agree with George this looks like a form of nimbyism. Still, it will be interesting to hear the complaints from the new residents when they are stuck in gridlock.